Black Eyed Peas recorded performances of four new songs with XR Studios, which have since been distributed in ‘promotion packages’ to seven primetime shows across the world, including Good Morning America and The Late Late Show with James Corden in the US, Peter Crouch: Save Our Summer in the UK and even more across Europe. These packages are combined with a band interview with the host of the show, and the recorded performances are played out, dazzling millions of viewers.

An album promotional trail for the release of Black Eyed Peas eighth studio album ‘Translation’ was not possible due to travel restrictions in place from the ongoing health crisis. Enter disguise xR technology. In a time of limited contact, xR is changing the face of delivery in broadcast and is proving to be a vital lifeline in taking virtual productions to the next level.

disguise xR shifts the production process by allowing the creation of fully immersive experiences and advanced technical opportunities within broadcast, by delivering virtual production capabilities, integrating seamlessly with LED, camera tracking and real-time content engines, and directing each element with power and precision.

The xR performances avoided all non-essential contact, mitigating the risks posed by COVID-19 and the traditional approaches to filming. The success is down to the close collaboration between the creative and technical teams led by XR Studios, with content designed by Silent Partners Studio, and direction by Silent House Productions, with real-time rendering from Notch.

“disguise xR has helped us to deliver a new paradigm of working, and ways to create incredible virtual performances that can enable a band to complete promotion of new music around the world without even stepping on an airplane."

“Will.i.am and the band have always pushed the boundaries of technology as it crosses over into music production, promotion and consumption, so a disguise xR workflow for their performances really were a perfect fit for them as a group,” explains JT Rooney of Silent Partner Studios, who was closely involved in the creation of the content with Will.I.Am and the bands management.

The series of performances by the Black Eyed Peas demonstrates the true power of disguise xR, completely diminishing the time-consuming scenic changes on set of a traditional music video or production. xR opens a door to an unrestricted virtual world, allowing in-house teams to design and recreate environments, and even bring in artists guest appearance on tracks who are unable to make the shoot.

In the performance of new single ‘Ritmo (Bad Boys For Life)’, the song credits a guest feature with Colombian reggaeton singer J Balvin who could not be at the shoot. disguise xR allowed Silent Partners to create a 3D digital version of the singer within the content and virtually perform his verse amongst the original designs of the songs music video.

Black Eyed Peas also performed perhaps their most famous song, Where Is The Love? Beginning on a round platform, with standout AR elements of the original iconic red question mark logo floating above the band, the scenery around them slowly evolves. The background displayed the names of recent police brutality victims, making a very poignant statement in light of the recent global events.

“With the combination of camera tracking, real-time rendering, limitless virtual environments on the live set and directly in-camera, xR technology allows performers to see and interact with the content around them, by using elements of augmented and mixed reality” said Tom Rockhill, CSO at disguise. “xR enables creative and technical professionals to tell stories in new and innovative ways for the world’s leading brands and artists and produces opportunities for collaboration, combining teams and technologies to drive a single creative vision.”

Other performances saw disguise xR ‘extending the set’, with two dancers on set reacting to the virtual dancers in the scene behind them. During the design process, XR Studios and Silent House Productions also creatively decided to use physical props in the performance.

The use of real mirrors combined with LED allowed for natural reflections of content across the LED - something that would not have been possible if using a green screen for this set-up.

“Having the Notch content engine integrated into disguise is invaluable and a huge benefit for a seamless integration for music performances,” adds JT. “It’s great to use an existing tool that is already part of the ecosystem, and that always translates well for feedback and augmentations on site rather than creating an entirely new workflow.”

JT said “XR Studios as a company has evolved and standardized the disguise xR workflow, and the collaboration has introduced the technology into the normal production environment. XR Studios’ process allows our teams to remain on schedule and on budget, with the right amount of constraints through a project, while harnessing this new technology to its best potential.” 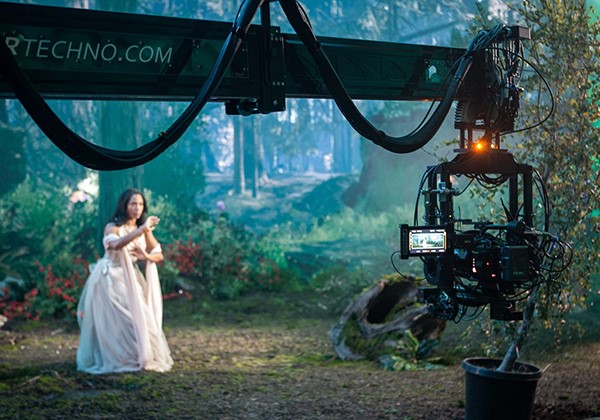