Inside the Great Arch Hall, deep within London’s Somerset House, sits an exciting, primeval, projection-mapped, sculpture that challenges its viewers to reconsider their environmental surroundings and, in many ways, their very being.

Aptly named MASK II, the concave ovoid artwork is the creation of Es Devlin, known for her kinetic, projection-mapped sculptures which are frequently seen in the context of theatre, opera and largescale concerts. MASK II is the latest in a series of solo sculptural installations that Devlin has been creating over the past two years.

With a diverse portfolio of projects including The Royal Opera House, Beyoncé and the London and Rio Olympic Ceremonies, Devlin is fast establishing herself as a respected and much sought-after artist in her own right, with solo works recently shown at the V&A, Somerset House and Serpentine Gallery. She is also the winner of numerous awards including three Oliviers, the 2017 London Design Medal, a UAL fellowship and an OBE.

MASK was originally a co-commission by Somerset House and the popular four-day international photography exhibition, PhotoLondon. However, the sculpture proved so engaging that Somerset House extended its exhibition run to five months. The London Design Biennale has now commissioned MASK II and Devlin has re-envisioned the work, creating a new projection film in response to the London Design Biennale theme, ‘Emotional States’.

MASK II takes the form of a 3D aerial-view facsimile of central London, wrapped into a concave ovoid, divided down the centre by the River Thames. The mesmerising piece is underpinned by a perennial loop of thought provoking, distorted projections that seamlessly mould themselves to the contours of the sculpture, constantly transforming the viewer’s perception. Throughout the day the film plays on a loop and with each revolution the layers are further excavated.

Devlin describes the concept: “MASK II is an ovoid, mask-shaped concave form, sculpturally imprinted with dense urban geometry. A river divides the map - a mirror-distorted image of a human brain. A film is superimposed on the sculpture, transforming it into a distorting mirror, sometimes glass, sometimes diffusing treacherously into water. A reflected face tries repeatedly to find itself, to define itself, working its way through a series of masks and states - emotional, geographical and geometrical. The work considers the range of scales of time and space that we simultaneously perceive and choose to remain blind to, as we calibrate our position within the period that we now call the Anthropocene, when what we know about the environmental impact of each thing we touch will soon preclude us from touching anything in the same way again.

“I’ve been working with film overlaid onto sculptural surfaces for some time. It is an interesting means of altering the viewer’s terms of engagement with the piece. We view sculpture in a different ‘mode’ to the way we watch films, and I find this overlay of viewing registers intriguing.” 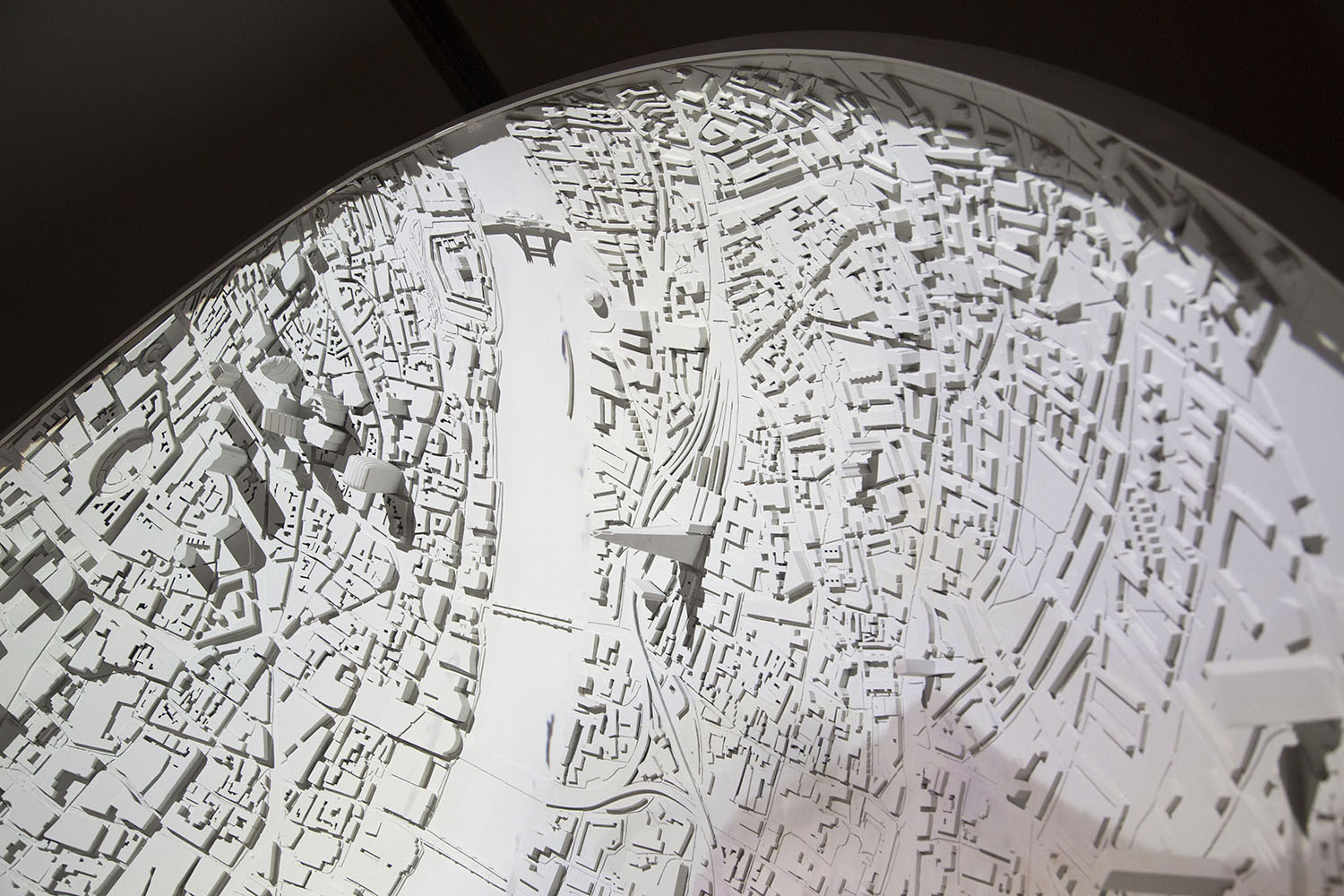 For MASK and MASK II Devlin worked closely with regular long-term collaborator Luke Halls and his co-director Charli Davis, at multi-disciplinary moving image design studio, Luke Halls Studio, to create the video content. Halls, whose portfolio includes the Metropolitan Opera, the National Theatre and Pet Shop Boys, is a keen long-term user of disguise products, choosing to apply the technology across a range of genres including theatre, dance, opera, concert touring and installation.

“I prefer to strip tech back unless it serves a real purpose. With disguise, it’s not just useful for the final technical delivery of a project, but from the very beginnings of an idea. We use it to develop the idea alongside Es. We could very quickly demonstrate what something would look like, create sequences and then fine-tune in our own time.”

Halls says the process of building the layers of the project was demanding: “It’s all very tactile, very creative,” Halls explains. “We wanted to achieve a raw quality, but at the same time ensure the idea was delivered clearly. It’s a challenge to balance something that looks artistic yet is purposeful and made for the actual sculpture. Es’s videoed hands had to be at perfect scale and move in exactly the right place inside of the sculpture itself. This was one of our biggest challenges...

The hands have to appear to remove the various layers as if they are truly part of the 3D sculptural space, so the mapped video and sculpture have to be perfectly aligned.

The disguise system has been at the core of all the projection mapped work I have been doing over the past decade: in opera, theatre, concerts and art works,” states Devlin. “As far as I know, it’s the most advanced system for precisely aligning digital media over three dimensional surfaces. We also use it to pre-visualise the work, so that I can compose the films with Luke Halls Studio and understand how they will appear in relation to the sculptural surfaces. Parts of the film are conceived to work in very precise relation to the sculpture and other parts are more fluidly overlaid. I would not have included the most precise alignments had I not been certain that I could achieve exact line-up - which is only possible in my experience with the disguise system.” 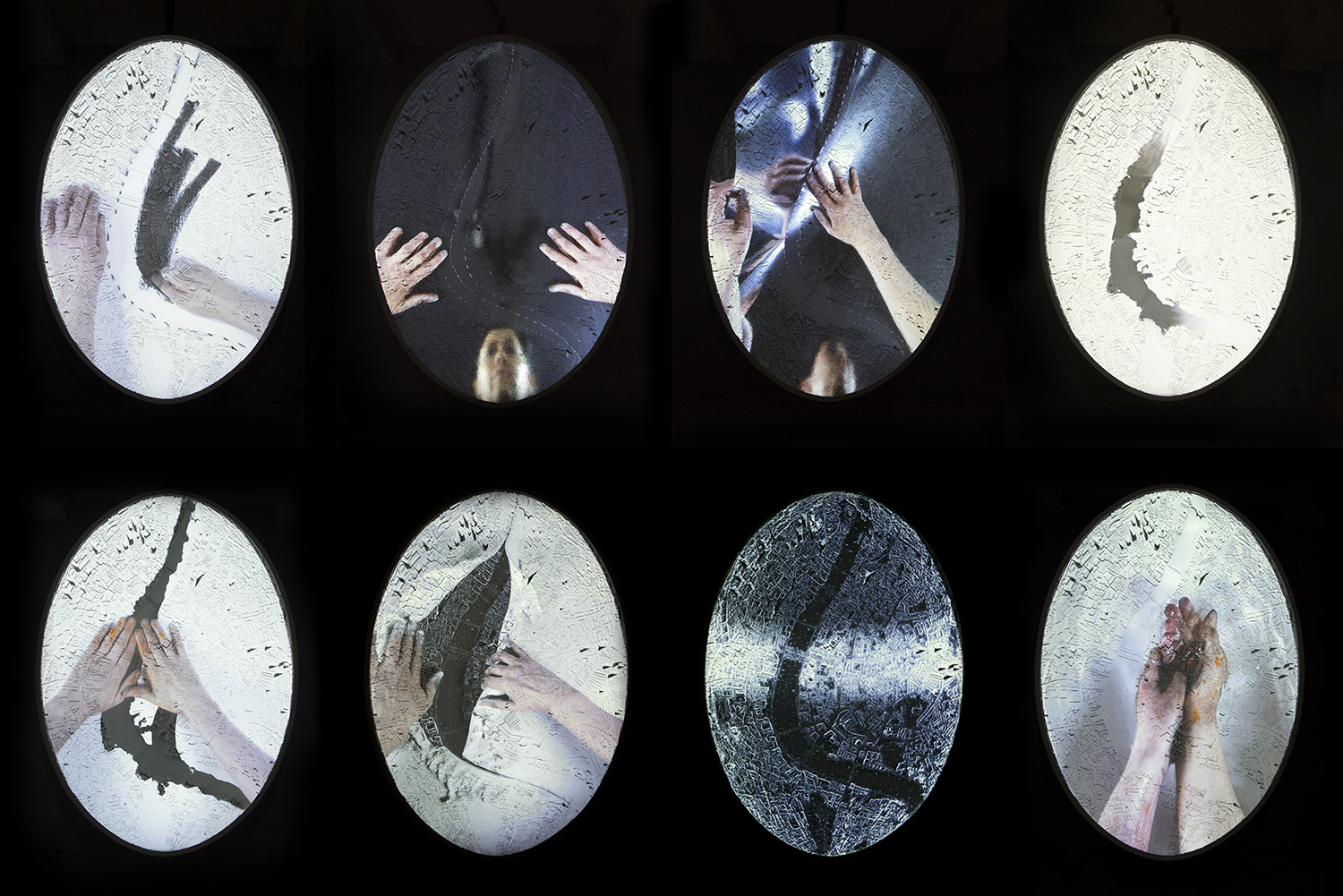 Halls says that disguise’s creative sequencing is also one of the biggest deciding factors for its use:

“We’ll often scope out the framework of a story within disguise.

It offers so much creative control in the timeline and we can make fast changes in real time. I love the fact that I can make something, edit it quickly, throw it back out, distort it and change things quickly inside the server then fine tune it later, using other specialist design software.

In theatre this enables me to deeply embed the video and projection into the productions I work on during rehearsals. I have to confess I use disguise on absolutely every project I work on, and, to be honest, I’m a bit lost when I don’t have it!” 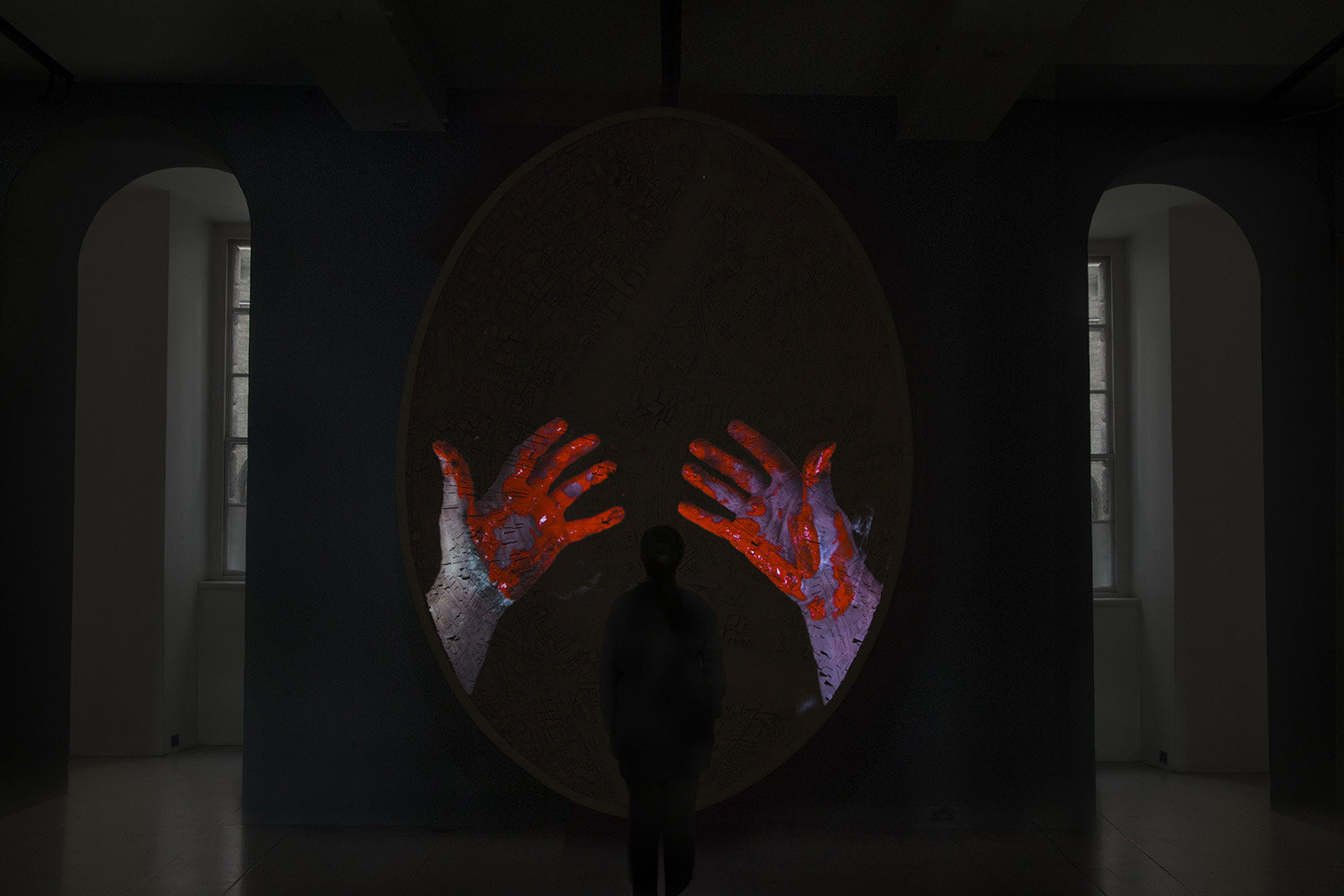 For Halls’ co-director, Charli Davis, the solo is a natural progression from the disguise 2x2plus. “It can be used as a stand-alone solution, to design, sequence and play back shows, or as a master in a larger network with pro and gx range machines,” she explains. “In theatre and performance, disguise allows us to embed the projection mapping into the story early in the rehearsal process, making it an integral element in the production from the get go.”

Adding further to its suitability for this project were solo’s compact size and timer capabilities. solo is secreted in a small cupboard in the exhibition space and activates itself at 9am and deactivates at 6pm every day. 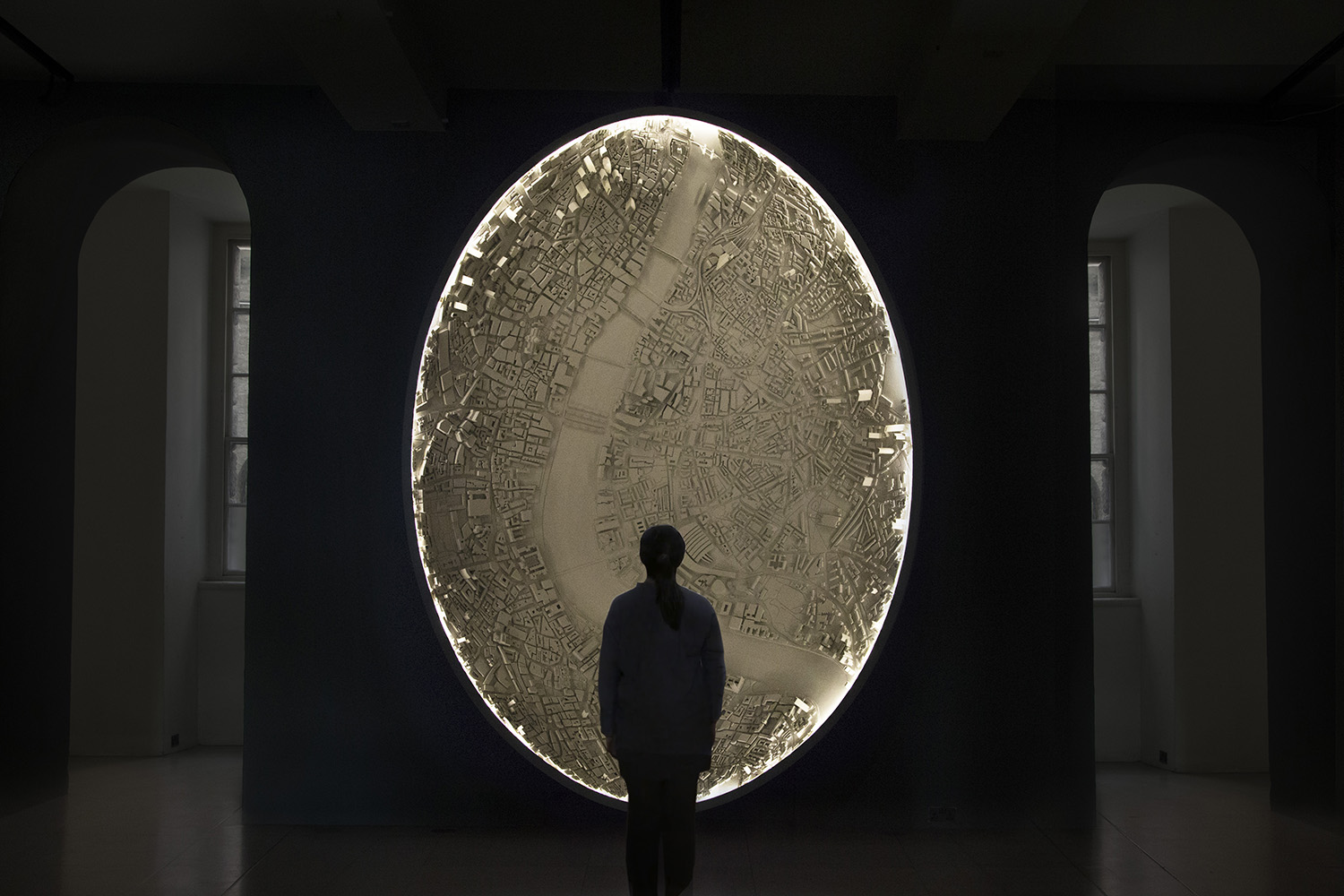 In addition, for easy synchronisation, MASK II’s immersive audio, created by res.lab, is also run through the solo server, making it the hub for the entire project.

The success of the project is in the fact that the physical sculpture and the video mapped content of the artwork seem naturally interwoven.

As the video reverts back to its beginning, London is stripped back to its bare bones. Where it was besieged by colour and texture, the urban London now feels atavistic and primordial. The exploration of Devlin’s hands through each layer is like an excavation. The message conveyed most strongly seems to be that there is so much beneath the surface. MASK II invites the viewer to challenge the fixed map in their mind and explore their potentially fluid relationship with the city and the environment.

Devlin and Halls are accustomed and known for delivering live shows that are to be viewed in-situ on a grand scale. Precisely scaled to fit Somerset House’s prestigious Great Arch Hall, MASK II’s potent impact on its daily stream of visitors is clearly evident.